International Conference of Military Cemeteries on the Isonzo Front

A two-day international conference of military cemeteries on the Isonzo Front was held on the 15th and 16th of September at The Walk of Peace in the Soča Region Foundation.

Over a century ago, the border area between Slovenia and Italy was the scene of the bloodiest battles of World War I which left a permanent mark on the people and the landscape. The war devastated homes, fields and forests. An observant eye can still spot the holes drilled into hills and mountains. But most of all, the war destroyed the interpersonal relationships between people and nations, that live in this area, and relationships are much harder to restore than torn down homesteads. Battles that lasted 29 months covered the gravel plains of the Soča River, high peaks of the Julian Alps and the stone karst landscape with a myriad of wounds. Military cemeteries are one of the reminders of this; hundreds of thousands of soldiers from several European countries lost their lives on Slovene ground, and became forever part of our land. There are around 60 military cemeteries located along the border between Slovenia and Italy. They stand as silent witnesses to the gruesome war. The hidden stories and destinies of young boys and men that leave the visitors speechless over and over again.

Many experts (historians, archaeologists, forensics and others) from Austria, Belgium, Italy, Hungary and Slovenia who are researching military cemeteries, presented their work and findings at this year’s international conference in Kobarid. Even though more than a hundred years has passed since the end of World War I, this period still presents many mysteries and challenges which researchers are still trying to unravel. The international conference, which focused on presenting different researches and examples of good practices, was concluded on 16 September with a visit to some of the Austro-Hungarian military cemeteries and Italian charnel houses. The conference gave the experts an opportunity to present their findings to the general public and, at the same time, strengthen collaboration with experts from neighbouring countries.

The project is co-financed by the public institution GO! 2025 – European Capital of Culture, Nova Gorica 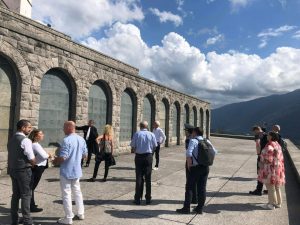 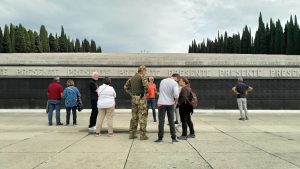