Together with the Soča Valley Development Centre and other partners, the Walk of Peace Foundation responded in April 2020 to the call by the EU, i.e. its Project Interact organizers, for the best EU project idea on the 30th anniversary of the EU Interreg Programmes which render possible various EU projects. As many as 150 project ideas from all over Europe were submitted to the call. On the basis of the presentation, expert commission selected 30 top projects, including the WALKofPEACE which is carried out within the Interreg V-A Italy‒Slovenia Programme. In a short time, the project holders of the 30 best ideas had to prepare a promotion film about their project. Supported by their Slovenian and Italian partners, the Walk of Peace Foundation and the Soča Valley Development Centre made the film, which convinced the commission to rank the Walk of Peace among the 6 top finalists. 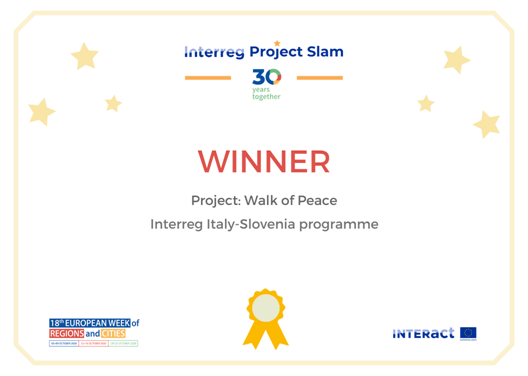 In August and September, the six finalists competed for the greatest number of likes on the Facebook portal. The Walk of Peace won second place with 3,150 likes (the winner, i.e. the Greek-Italian CIAK project, won 3,800 likes), but had the greatest number of views (42,500) and shares (800) of the film. The last step to be done awaited the six best projects in September: to prepare a presentation (TED talk or performance) of the project in which only the employees of the project partners were allowed to appear. The Foundation decided on a more difficult and more creative way: it prepared a 5-minute playlet in which the three appearing persons presented the mission and the vision of the Walk of Peace. Appearing in the performance were colleagues from the Walk of Peace Foundation, the Soča Valley Development Centre and the PromoTurismoFVG.

The concluding event, at which the presentation of the idea should have been made and the decision reached on the final winner, had been planned for October 14 in Brussels within the European Week of Regions and Cities 2020. Because of the COVID-19 situation the organizers cancelled it and moved everything to online presentations, which caused additional difficulties and challenges to everyone. Nonetheless, all 5 projects (one dropped out during this difficult process) were presented live on the very day, via an online application. The Foundation presented its project idea and the closing performance. Then, only 2 minutes were available to vote for the final winner. There were about 400 votes in total, and of these the Walk of Peace received 163 votes, thus becoming the winner.

The Foundation develops the idea on the basis of the tragic story of World War I, which is common to all of Europe (and the world) and is a connecting power nowadays. The essence of the project is captured in the preservation and research of the heritage and memory, the development of cultural tourism and the spread of the value of peace, friendship and cooperation between nations now and for future generations.

The Walk of Peace is an idea and a project actually based on close transborder cooperation between Slovenia and Italy over the past 10 years. Through transnational EU projects and other initiatives in recent years it has connected representatives and institutions also from other countries (Austria, Belgium, Bulgaria, Bosnia and Herzegovina, Croatia, the Czech Republic, Hungary, Germany, Rumania, Russia, Slovakia, Ukraine, etc.). It carries and spreads the values of the European Union, so the Foundation, the designer of the idea, has believed in its power, responsibility and opportunity for 20 long years.

The honorary patrons of the Walk of Peace are also the presidents of the Republic of Slovenia, Mr. Borut Pahor, and of the Italian Republic, Mr. Sergio Mattarella.

Winning the Interreg Project Slam competition in the jubilee 30th year of this programme and on the 30th anniversary of the Kobarid Museum and the 20th anniversary of the Walk of Peace Foundation has not brought the Foundation any financial or some other reward. Its merit is greater: acknowledgement that the Foundation and its numerous partners (municipalities, development agencies, museums, Scientific Research Centre of the Slovenian Academy of Sciences and Arts, Institute for the Protection of Cultural Heritage, tourist destinations, and tourism providers, private collectors, societies, Triglav National Park, ministries, etc.) are on the right track, that the EU and its inhabitants recognize the Walk of Peace idea to be important for Europe, for everyday life and for everyone. The recognition will increase the visibility of the Foundation and its European partnership, of the idea and the long-term project not only in the trans-border area but also wider, across Europe. This is an excellent reference for new European projects which are already being prepared and which ensure the existence and development of the 8 employees at the Foundation and the colleagues at the Soča Valley Development Centre and elsewhere.

To repeat again: Sincere thanks go to all those who supported the Foundation several times during this action and who were following the activity throughout and backing up the mission and vision of the institution, the Walk of Peace Foundation. Thanks very much indeed to the Soča Valley Development Centre which joined the venture 5 years ago and with the help of which the Foundation has carried out or is still implementing 2 major and important EU projects (NETWORLD at the Interreg Danube Transnational Programme and the WALKofPEACE at the Interreg V-A Italy ‒ Slovenia Programme), and the PromoTurismoFVG of Italy, which is becoming the Foundation’s main coordinator on the Italian side. Thanks to all municipalities and other institutions and individuals from Bovec to Miren, from Kranjska Gora to Pivka, who have believed in us for many years, and the Scientific Research Centre of the Slovenian Academy of Sciences and Arts, Institute for the Protection of Cultural Heritage, and the Slovenian Tourist Board, and to supportive ministries. Thanks to all Italian friends and colleagues!